2021-08-30
The window sticking process of the window sticking machine is mainly used in the packaging of cartons, gift boxes, window-sticking envelopes, etc., so that the goods can be seen clearly on the packaging; the contact between the printed film and the plastic film depends on the effect of the adhesive, therefore, The performance of the adhesive has a very important influence on the quality of the finished product after printing;

1. The ratio of binder and thinning water. Strictly follow the requirements of the film and adhesive when blending, otherwise it will cause weak bonding. Automatic window patching machine 3. The coating thickness of the adhesive. If the coating amount of the adhesive is too small and the thickness is too thin, the adhesive force will be insufficient and the film will fall off easily. However, if the coating layer is too thick, the effect is even worse: the solvent volatilization in the adhesive slows down, and the product is prone to foaming after being placed; due to the moisture content of the paper, the paper fiber shrinks and wrinkles at the window The rubber ring is extruded at the process of the window patching machine. These will cause fatal damage to the quality of the film.

3. Thickness of adhesive coating. If the amount of adhesive applied is too small and the thickness is too thin, it will cause the film to fall off. However, if the coating layer is too thick, the effect will be even worse: the solvent in the adhesive will slow down, and the product will easily foam after being placed; the paper content will be affected by the amount of water, and the paper fibers will shrink at the window where they are stuck. Wrinkles are produced, and the rubber ring is even squeezed out at the window. This will cause fatal harm to the quality of the film.

The automatic high-speed window sticking machine is composed of four steps: film feeding, film cutting, film conveying, and film sticking. Unfold a whole roll of film according to the width of the window on the jam, and load it into the material rack device at the end of the host. The length of the film is generally 30mm longer than the length of the window, and the width of the film roll is about 25-30mm wider than the window. 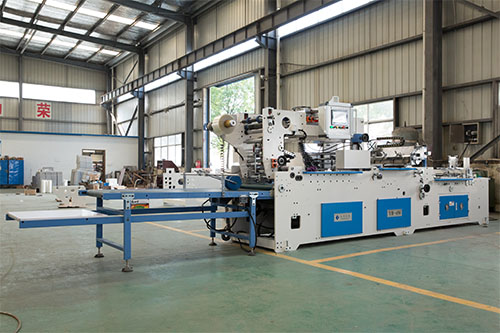 Adjusting the length of the cut film: the length of the cut film is generally 30 mm longer than the cut film length of the window, and the width of the film roll is about 30 mm wider than the window. The cutting length of the film is within the range specified by the machine and can be adjusted according to the size of the jam window. The drive side of the automatic window sticking machine is equipped with a stepless speed change device with digital scale adjustment. The sprocket coaxial with the gear on the cutter roller drives the sprocket on the stepless speed input shaft. After deceleration, the output sprocket will output. Drive the film-feeding power roller sprocket to adjust the speed of the power roller and the cutter roller to make it have a certain speed relationship, so that it has a higher speed. The cutting knife will work stably as a cut-to-length film. It is forbidden to turn the adjustment handwheel when it is stopped, otherwise it may cause damage to the continuously variable transmission.

Installation and adjustment in the width direction of the membrane: the membrane roll is mounted on the axis of the material rack, press the handle on the wall plate counterclockwise, relax the rubber roller, let the membrane pass through the lower blade, and then release the handle, the membrane is random The rotation of the device is discharged. When there is a deviation in the width direction, paste the film film onto the paper product window, and move the relative position of the film on the axis of the material rack by loosening the three M6 Anqing Yonghua machine screws at both ends of the film, so that the film Loosen the film against the paper jam window, make the M10 nut and the knurled nut, rotate the adjustment handwheel to realize the fine adjustment of the position of the roll film to the automatic window sticking machine. After the adjustment is completed, lock the screw and nut. If the diaphragm is too wide, you can use a cutter to cut the diaphragm to the desired width. For example, the diaphragm needs an indentation adjustable heating device to indent the diaphragm.

If you need more information about the new technology and new process of the automatic window sticking machine, you can leave a message for consultation